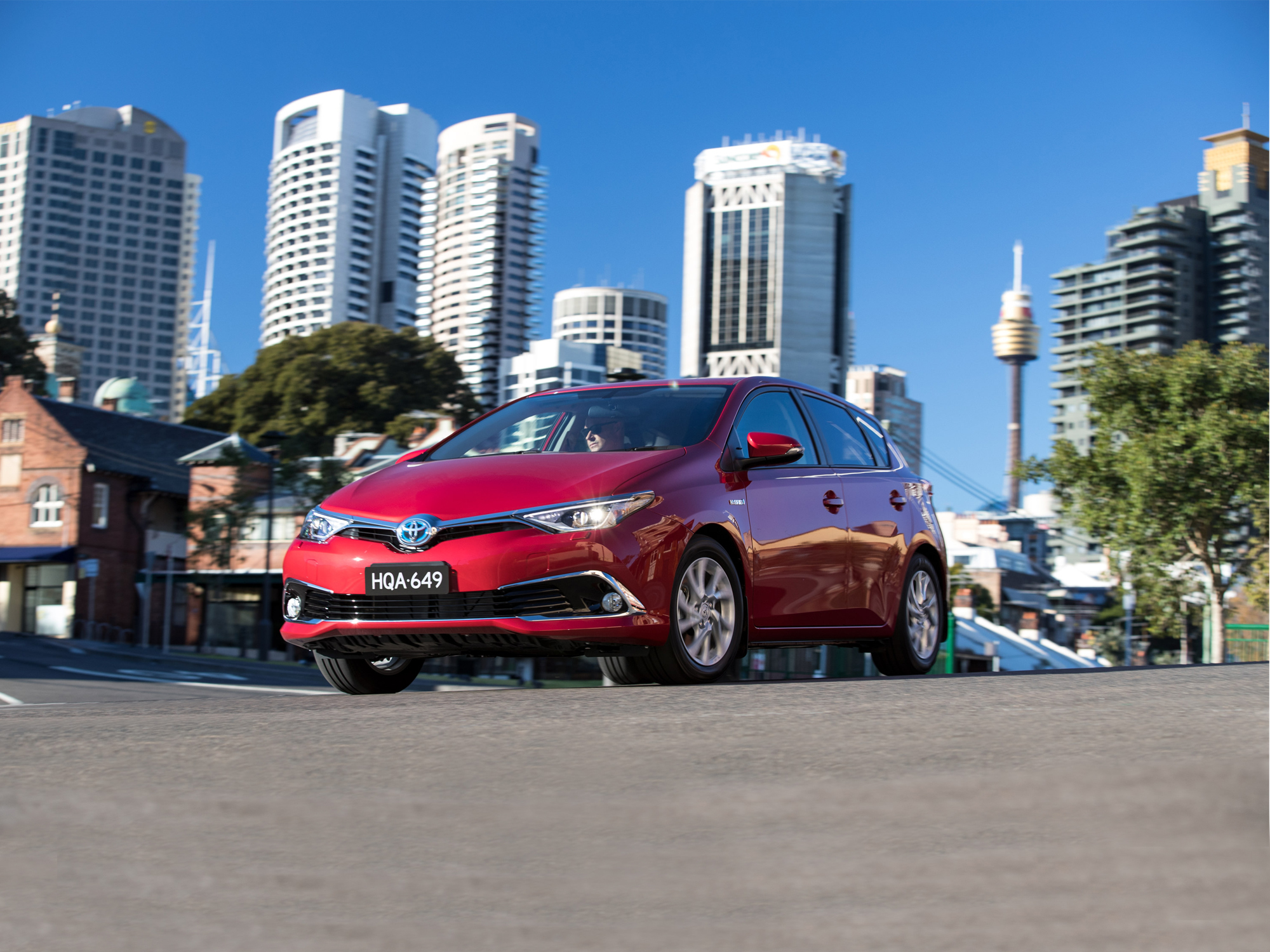 Toyota has combined the popularity of its Corolla hatch with the company’s dominant hybrid technology to launch a new model that delivers impressive fuel economy, nimble handling, strong value and keen pricing.

Apart from Toyota’s Prius, Corolla hybrid offers the best fuel economy in its class with official consumption of just 4.1 litres/100km*, providing a theoretical driving range of almost 1,100km – and even further around town.

The new Corolla hybrid is equipped with driver-focused features not offered on any other Corolla in Australia, starting with the handling, stability and comfort advantages of double-wishbone rear suspension.

It is the only Corolla fitted with electronically controlled brakes, larger 296mm x 28mm ventilated front discs, three selectable drive modes (power, economy and electric) and a hybrid display in the instrument cluster. 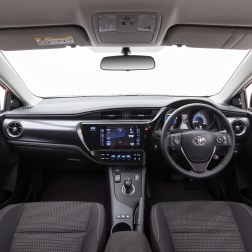 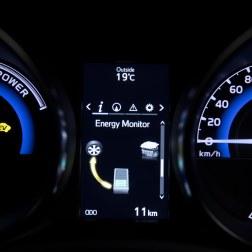 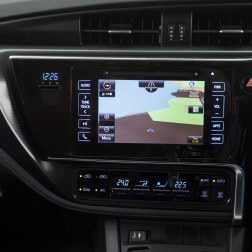 Reflecting its comprehensive equipment list, the Corolla hybrid with standard automatic (CVT) transmission is keenly priced from $26,990## – placing it between the petrol-only SX and ZR hatches.

It is the fifth hybrid car in Toyota’s local line-up, joining Camry, Prius, Prius c and Prius v and arrives just four months shy of the 50th anniversary of the launch of the first Corolla in Japan in October 1966.

Toyota Australia’s executive director sales and marketing Tony Cramb said the new Corolla is the third hybrid model introduced in a little over a year, along with the latest Camry and the fourth-generation Prius.

“The hybrid version of the popular Corolla represents great value for money with its impressive equipment levels, exceptionally low running costs and the proven performance and fuel-efficiency of Toyota’s full hybrid technology,” he said.

“With unique features such as its independent rear suspension, Corolla hybrid will also deliver the driving enjoyment, remarkable quietness and smooth operation that will make it an ideal choice for everyday motoring.” 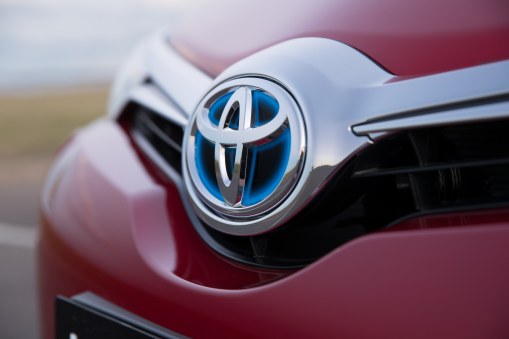 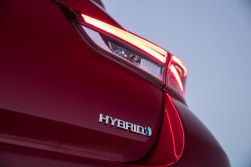 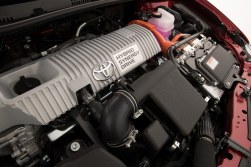 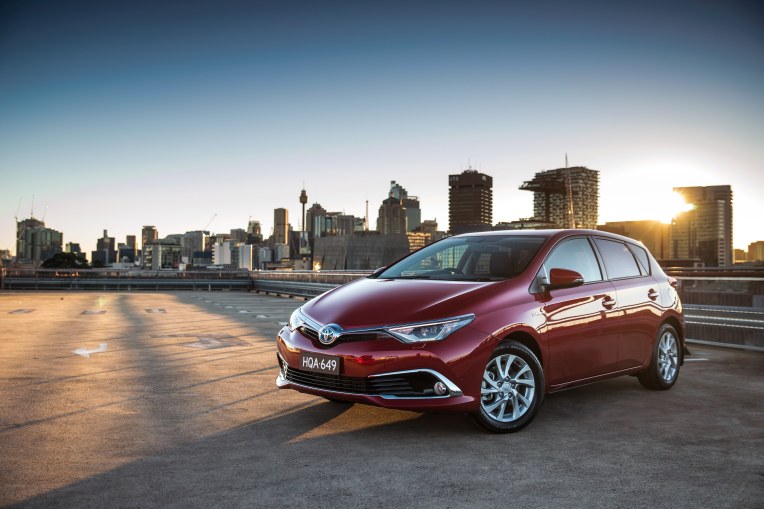 Efficiency features for the petrol engine include cooled exhaust-gas recirculation, an electric water pump and a compression ratio of 13.0:1 (compared with 10.0:1 on petrol-only Corolla).

Official fuel consumption of 4.1 litres/100km* compares with 6.1 litres/100km* for automatic Corolla petrol hatches. This expands the theoretical maximum driving range by almost 280km to 1,097km, even with the fuel tank slimmed from 50 to 45 litres.

Around town, the official fuel economy at 3.9 litres/100km* is more than twice as good as that achieved by the already efficient automatic petrol-only variants at 8.0 litres/100km*, boosting the driving potential on a single tank to more than 1,150km.

Toyota’s Hybrid Synergy Drive technology is capable of operating in petrol and electric modes alone, or a combination of both, depending on driving conditions.

The newest addition to the Corolla range retains the standard hatch’s 360 litres of luggage space with the hybrid battery placed under the rear seat.

Now in its 11th generation, Corolla sales have topped 44 million globally. It is the most successful car in Toyota’s Australian range with 1.35 million sales since it went on sale here almost half a century ago in 1967.

Corolla has been Australia’s best-selling car for each of the past three years. Every new Corolla is covered by Toyota Service Advantage capped-price servicing at a maximum of $140 per service^^ for the first three years or 60,000 kilometres.

To see what we have in stock, click here.

* Fuel consumption and emissions will vary depending on driving conditions / style, vehicle conditions and options / accessories.
# Current navigation mapping database encompasses major capital and primary national road networks and offers some coverage in regional areas.
^Suna™ GPS Traffic Updates are only available in metropolitan Adelaide, Brisbane, Canberra, Gold Coast, Melbourne, Perth and Sydney; it operates from information provided by Intelematics Australia and may not cover all road incidents and congestion. See sunatraffic.com.au for details.
**Toyota Link is available on certain vehicle models and grades only. Toyota Link services rely on data from the driver’s compatible mobile phone and information provided by third parties. Availability is dependent on a number of factors, including the availability of third party information, mobile service, sufficient mobile data allowance and GPS satellite signal reception. Mobile usage is at the user’s cost. Toyota Australia reserves the right to add, remove or modify applications. Further information is provided at http://www.toyota.com.au/toyotalink.
##Manufacturer’s list price is provided for media purposes only and does not include statutory charges or other on-road costs.
^^Maximum payable for standard scheduled logbook servicing (normal operating conditions) until first of 3 years or 60,000kms (whichever occurs first) (up to the first 6 services). Excludes Government & Rental vehicles.