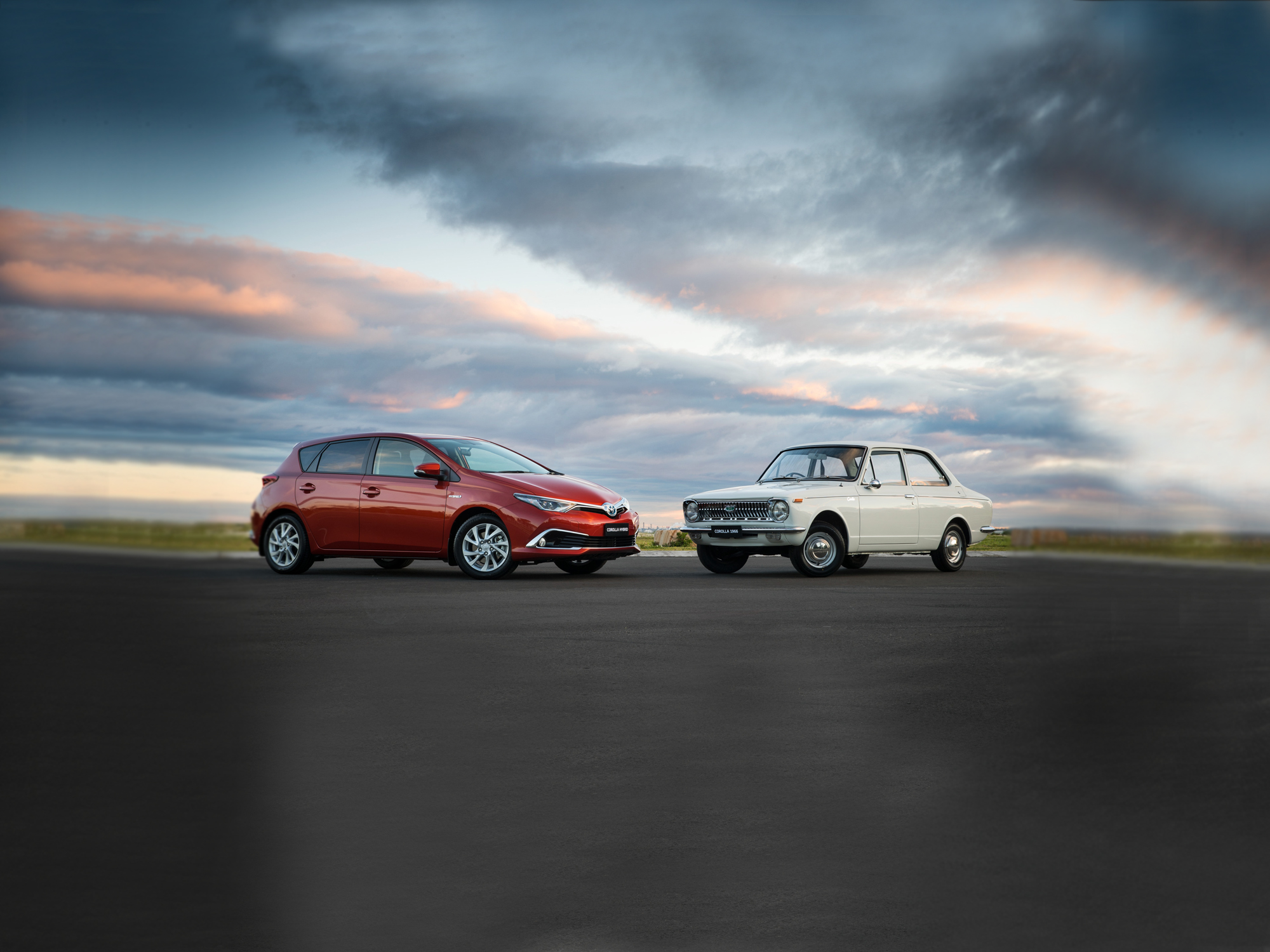 Toyota’s Corolla has achieved a major milestone last month as the world’s most popular car celebrated its 50th anniversary.

Introduced to Japan in October 1966 as the “people’s car”, cumulative global sales of Corolla have grown to more than 44 million.

The global sales tally equates to approximately 100 cars being built and sold every hour throughout the past half a century, or one every 36 seconds.

Australia has featured prominently in Corolla’s history since local sales began in 1967 – the destination for the first Corolla exports, the site of the first factory outside Japan to build this popular model, and the scene of its earliest international motorsport success at Bathurst.

Corolla has been Australia’s best-selling car in each of the past three years and cumulative local sales have now reached more than 1.35 million cars.

Corolla, which became the world’s best-selling automotive nameplate in 1997, accounts for one in five vehicles sold in Toyota’s 79-year history and a slightly higher proportion in Australia.

Currently produced at 16 plants worldwide, more than one million units have been sold each year since 2002. Last year, a total of 3,670 Corollas were sold every day across more than 150 countries and regions.

“Australians have always loved Corolla because it has continually captured their imagination by being affordable, fuel-efficient, dependable and fun to drive through each of its 11 generations,” Mr Cramb said.

One month after Corolla’s debut, the first export shipment of 15 cars left Japan bound for Australia in November 1966 and went on sale here the following year.

From 1968 until 1999, more than 666,000 Corolla cars were built in Toyota factories at Port Melbourne, Dandenong and Altona in Melbourne.

Corolla has a long and successful motorsport record in Australia, helping to forge the car’s reputation as durable, reliable and fun to drive.

Class victories at the Bathurst 500 enduro in 1968 and 1969 effectively put Corolla on the motorsport map. It won a further eight consecutive class victories at Bathurst from 1985-92 and compiled a string of touring-car victories and success in rallying.

Corolla’s sales have grown from strength to strength in Australia. It took more than eight years for the first 100,000 Corollas to be sold after its introduction in 1967. The most recent 100,000 sales took just over two years and four months.

Corolla became a “millionaire” in Australia in September 2007 with total sales moving into seven figures four months after the model’s 40th anniversary in Australia.

Originating from the Latin term for “crown of flowers”, the name Corolla was chosen in the hope the vehicle would bloom in the automotive market. And that’s exactly what it did: within three years the first-generation Corolla became the top-selling vehicle in Japan, and sales quickly spread around the world.

In-depth analysis and the incorporation of customer feedback have been integral to the development of each new generation of Corolla. As a result, Toyota has built on the philosophy behind the creation of the first Corolla – a car of superior quality, durability and reliability (QDR) – with a determination to exceed customer expectations in every key area highlighted by their feedback.

The result is that today’s Corolla hatch and sedan inherit 50 years of Corolla DNA in always evolving and being designed to meet the diverse needs of a global customer base. They feature prestigious exterior designs, a strong focus on sensory quality, roomy interiors and high levels of technology and safety equipment.

Above all, Corolla continues to build on the model’s legendary QDR with significantly enhanced quality in every aspect of its design and engineering, while continuing to represent impressive value for money.

The 50-year history of the ever-evolving Corolla, filled with examples of technology and quality improvement, is emblematic of Toyota’s continued efforts to anticipate customer needs and build ever-better cars.

1st Generation Corolla (1967)
Chief engineer Tatsuo Hasegawa and designers set out to capture the hearts of the general public with a car that was sporty in look and feel. This revolutionary new car adopted new technologies not seen before on the Japanese market, such as MacPherson strut suspension and a four-speed transmission. Australian buyers were offered a two-door sedan and Corolla soon became known as an affordable, high-quality vehicle. Toyota began assembling Corolla at Port Melbourne in 1968.

2nd Generation Corolla (1970)
Corolla was a hit with young people. In the year that the one-millionth Corolla was built, the “all-new Corolla” featured revised exterior styling with gently curved surface lines. A longer wheelbase and greatly improved suspension improved ride comfort and handling. It was noted for its lively character and seemingly unbreakable engine.

3rd Generation Corolla (1975)
Excellent fuel efficiency and Toyota’s pioneer development of the catalytic converter ensured Corolla gained popularity in the wake of the global fuel crisis. Another modern advance, the wind tunnel, enabled the exterior design to cut through the air more efficiently. Inside, interior quality and ergonomics improved with the Corolla feeling like a car from a higher price bracket. Models offered included the two-door, four-door hardtop, wagon and van. Annual sales in Australia topped 20,000 for the first time in 1975 – and have remained above that level ever since.

4th Generation Corolla (1981)
The new-generation Corolla was re-imagined as a luxurious but economical family car with superior overall performance. With more than 400 hours of wind-tunnel development, its exterior design evolved seamlessly into a wedge shape. It was the last Corolla to have rear-wheel drive across the range. Global production reached 10 million vehicles in March 1983.

5th Generation Corolla (1985)
This new model was the first to be engineered with the aid of computers, saving time and resources in the design of the engine and exterior. Corolla was transformed into a modern front-wheel drive car and became the world’s first mass-produced small car to feature twin-cam multi-valve technology. Corolla entered the Guinness Book of Records with 24 consecutive class wins in the Australian Touring Car Championship (1985-86).

In Japan, this generation also featured rear-wheel drive coupe models with longitudinally mounted engines. The 1.6-litre variation, known as hachi-roku (or “eight-six” in Japanese) in reference to its AE86 chassis code, was the last Corolla with a FR drivetrain. Its numerous race and rally successes, not to mention its lead role in popularising the sport of drifting, means this model has become one of the most cherished and iconic vehicles in Toyota’s modern history. It was an inspiration behind the modern Toyota 86, launched globally in 2012.

6th Generation Corolla (1989)
The key word in the development of the new Corolla was “quality”, both in how the car felt and how it would make its owners feel. The spacious interior and seating comfort of the Corolla were mated to the sportiness of twin-cam 1.6 and, later, 1.8-litre engines. This was a period in which Corolla won its class in the Bathurst classic eight years in a row from 1985 to 1992 – making 10 class victories in total. Corolla was vital in Toyota becoming market leader in Australia for the first time in 1991.

7th Generation Corolla (1994)
Toyota launched a 13-model locally manufactured range, developed to appeal with its design, driving performance and safety and reliability. This was the first vehicle to be built at the company’s Altona plant in Melbourne. For the first time, Corolla had the options of anti-skid brakes and a driver’s airbag. Motorsport prodigy Neal Bates gave the Corolla World Rally Championship car its first international victory in 1997.

8th Generation Corolla (1998)
An imported European-style Corolla Liftback was added to the extensive locally built range. It was the first Corolla offered in Australia with a front passenger airbag. The eighth-generation Corolla became the number one selling car in Japan by reducing the total cost of ownership and providing a safer, quieter and higher quality compact car.

9th Generation Corolla (2001)
The ninth-generation Corolla featured edgier styling, a longer wheelbase and new technology. Tasked with breaking links with the past and setting standards for the 21st century, it included intelligent variable valve timing across the range and side airbags for the front seats. It was available with hatchback Seca, sedan and wagon bodies. Along with ease of use and reliability, its hallmarks were a high level of interior finish and comfort to rival higher segments. Toyota and Corolla won its first Australian Rally Championship (ARC) manufacturers’ title in 2006 with Simon and Sue Evans taking the series victory. Also in a Corolla, Neal Bates and Coral Taylor were runners-up.

10th Generation Corolla (2007)
Adopting a global perspective, dynamic performance for the 10th generation was benchmarked with the best in Europe, while ease of use and space had to appeal to markets such as North America and Australia. Through its development, the engineers worked to a five-minute impression rule, where customers would recognise the quality of this new model within five minutes of their first drive. This generation introduced a new 1.8-litre four-cylinder petrol engine and a new six-speed manual transmission. It was the first vehicle in its class with dual variable valve timing and the first to offer a driver’s knee airbag. Cumulative sales in Australia passed one million in late 2007. Toyota and the Evans team repeated their ARC success in 2007. The following year, Bates and Taylor won the Australian Rally Championship manufacturers’ and drivers’ titles in an S2000-spec Corolla.

11th Generation Corolla (2012)
The hatch launched in 2012 and the sedan in 2014 introduced new prestigious exterior styling, a strong focus on sensory quality and higher levels of technology and safety equipment. Engine enhancements, aerodynamic improvements, weight savings and other measures contributed to dynamic and efficiency gains across the range. A major advance in 2016 came with the introduction of a hybrid powertrain, bringing impressive fuel economy, nimble handling, strong value and keen pricing. Corolla has been Australia’s best-selling car for each of the past three years. Now celebrated as the world’s best-selling car, the icon that is Corolla is set to live long into the future.