Toyota has adopted new styling and improved safety for a revised Yaris range that is set to add further impetus to the success of Toyota’s small hatchback.

These technologies are standard on the top-of-the-range ZR and a $650 option on the Ascent and mid-range SX variants.

The car’s new exterior styling, with significant changes to the front and rear, presents a more active and dynamic look while also communicating a more refined direction. The interior has also been freshened with modern gloss black ornamentation.

Despite the styling improvements, the starting RRP for the range remains at $15,290* for the Ascent and an unchanged $17,330* for the SX with the option of automatic transmission steady at $1,530. The new auto-only ZR price of $22,470* reflects the added safety equipment.

Toyota’s executive director sales and marketing Tony Cramb said the more stylish Yaris adds to its appeal as an affordable, economical and fun-to-drive car with a spacious interior.

“In addition, Yaris now offers advanced safety systems that can help prevent an accident happening, or lessen the consequences if an impact does occur,” Mr Cramb said. 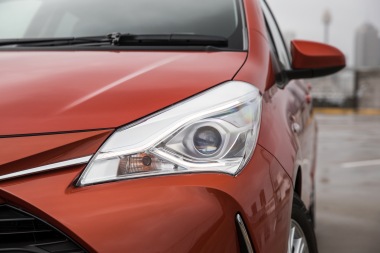 Styling updates
Much of the responsibility for shaping the new Yaris was handed to the Toyota ED2 design studio in the south of France.

They crafted a more dynamic and emotional shape with a stronger three-dimensional quality and a greater emphasis on horizontal lines to express a wide, more planted stance and low centre of gravity.

A simplified design that adds mass around the central Toyota emblem adds to the overall dynamic impact.

Fog lamps, fitted to SX and ZR grades, are placed in a more compact recess with a vertical line that follows the outer edge of the bumper and features a bright chrome trim detail.

New headlights feature a forked frame around the main lamp that flows seamlessly into a single line. This line extends beyond the headlamp in a matching chrome trim element that extends towards the central Toyota emblem.

On ZR, with its bi-LED headlamps, the distinctive forked pattern is created by light guides. On the other grades, which have halogen units, the effect is achieved by using slim chrome trim bars within the headlamp unit.

The new side view helps generate added dynamism with more emphasis given to the axis line of the body from front to rear, leading into a new tailgate and rear combination lamps.

A new lower door moulding adds a sportier look, complemented by newly designed wheels – 15-inch steel with a silver cover for Ascent and SX and new 16-inch alloy with a silver-metallic finish for ZR.

At the rear, the new tailgate design emphasises width with redesigned light clusters that extend from the wings onto the tailgate. ZR grade features LED stop and tail lights.

Similar to the new frontal design, a “catamaran” architecture has been created with a new bumper design that harmonises with the lines of the tailgate and extends to side reflectors separated by a lower bumper garnish. ZR grade has a unique garnish in the lower bumper, edged with reflectors and finished with a pattern of strake-like horizontal lines.

A new vivid colour has been added to the range of paint finishes – Azure Blue (replacing Aura, a lighter blue), maintaining a total of 10 different shades.

The focus for changes to the Yaris interior was to freshen the look and ambience of the cabin by replacing silver finishes with more modern gloss black inserts on the steering wheel, audio unit surround and around the gear-knob base.

Key features
The European-styled and Japanese-built Yaris hatch range is offered with a 1.3-litre four-cylinder engine in Ascent grade or a 1.5-litre engine for SX and ZR. Both engines are now rated Euro 5 for emissions control.

SX variants, in addition to the bigger engine, are equipped with front fog lamps, rear and rear side privacy glass, and a premium steering wheel and gear-shifter.

Every Yaris is fitted with seven airbags, a reversing camera, vehicle stability and traction control, anti-skid brakes with electronic brake-force distribution and brake assist, and an emergency brake signal that flashes the hazard lights.

Safety systems – standard on ZR, optional on Ascent and SX
The pre-collision system^ uses a front-mounted laser to monitor the road ahead, warning the driver of an imminent collision risk and preparing the brakes to deliver maximum braking the moment the brake pedal is pressed. If the driver fails to respond to the warning, the system will trigger autonomous emergency braking to slow the car to reduce the severity of any impact.

Lane departure alert^ monitors lane markings on the road surface and helps prevent accidents caused by the vehicle moving out of its lane. If the Yaris begins to deviate from its lane without the turn indicators being used, the system alerts the driver with visual and audible warnings.

Automatic high beam^ detects both the headlights of oncoming traffic and the tail lights of vehicles ahead, automatically switching between low and high beam to avoid dazzling other drivers while maintaining the best possible illumination for night-time driving.

Yaris in Australia
Australian motorists have bought almost 220,000 Yaris models since the nameplate arrived in Australia in October 2005.

Yaris replaced Toyota’s Echo which had been the best-seller in the light-car segment for the previous two years. Echo was the nameplate used locally for the first-generation Yaris and achieved almost 82,000 sales.

Yaris has led the light-car segment in four calendar years and has been runner-up five times.

Every new Yaris is covered by Toyota Service Advantage capped-price servicing at a maximum of $140 per service**.

If you’re interested to find out more, or want to come in and test drive, contact us today at Strathpine (3000 8000) or North Lakes (3000 9000). Visit our website for more details… www.torquetoyota.com.au