Toyota HiLux has triumphed with a milestone first victory in the world’s most gruelling rally, Dakar.

Competing under the Toyota GAZOO Racing SA banner, they avoided taking any risks on the short 10th and final stage of one of the toughest Dakar rallies in the past decade.

A day earlier, Al Attiyah set the pace, winning his third stage and edging closer to victory on a day that caused major problems for three of his closest rivals.

The Qatari master has now won three Dakar titles. Not only was it a first win for Toyota, but it was also the first petrol-powered car to win the Dakar in the South American era.

Al Attiyah retook the lead on stage three – a position he did not relinquish despite some of the toughest stages yet seen on any South American Dakar. 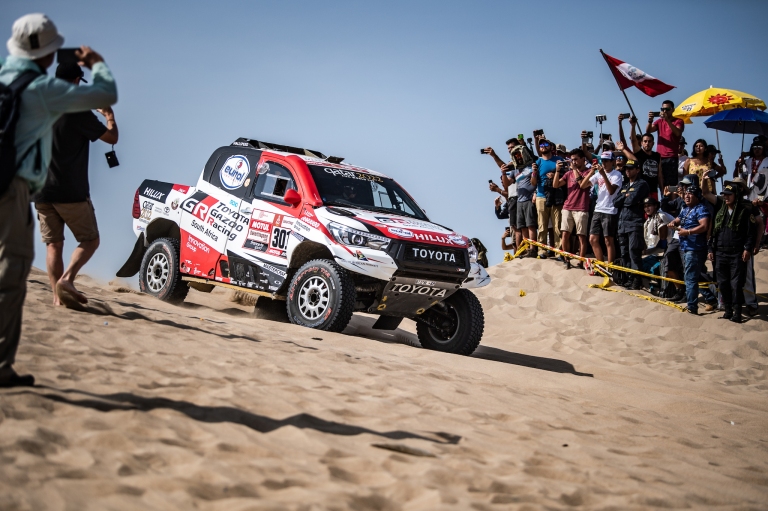 “We are so happy to win the Dakar – not only for ourselves, but also for Toyota and the entire Toyota Gazoo Racing SA team,” Al Attiyah said.

“Everyone has worked so hard for so long, and really deserve this. Thank you for letting us drive this car.”

The victory means that Toyota GAZOO Racing has now won both of the world’s toughest automotive races – the 24 Hours of Le Mans and the Dakar Rally.

De Villiers, who tumbled out of contention after hitting a rock in thick dust during stage three, said he was happy to support Al Attiyah once his dream ended.

“If we couldn’t win it ourselves, the next best thing was for one of our teammates to take the victory, and I am overjoyed at the final result,” he said.

Toyota motorsport
Toyota has a proud international motorsport history spanning more than 60 years. It became the first Japanese car manufacturer to enter international motorsport when it contested the 1957 Mobilgas Round Australia Rally, which is why many people consider Australia to be the birthplace of Toyota motorsport. Today, Toyota GAZOO Racing contests the FIA-sanctioned World Rally Championship, World Endurance Championship which features the famed 24 Hours of Le Mans, and the gruelling Dakar rally. Closer to home, the Toyota 86 Racing Series seeks to develop the talent of tomorrow as Australia’s premier grassroots circuit-racing category. In rallying, Toyota also supports the Toyota GAZOO Racing Australia rally team in the Australian Rally Championship.